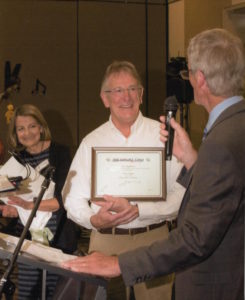 In  the 1990s  Brian found himself Assistant Conductor of the Rugby Choir, an all-male community choir in Canberra. In response to requests from local churches and retirement homes, Geoff Smith from the Rugby Choir approached Brian to help him set up a new mixed choir dedicated to gospel music.

With Geoff Smith as its manager and Brian its musical director, the Gospel Folk was formed in 2003. It started small—just 10 people turned up to the first rehearsal. The next week it was 12. “Brian  remembered saying, ‘Well, if it doesn’t get up, let’s just call it off. ” But it kept building up.  Within a short time the Gospel Folk had 80 members.

So the Gospel Folk members learn about voice production, harmony, performance style and the basics of reading music. They sing in four parts (soprano, alto, tenor and bass).

Although their repertoire includes many gospel favourites, like Swing Low, Sweet Chariot and By the Rivers of Babylon, the Gospel Folk also sing popular hymns (How Great Thou Art), folk songs, African songs and even contemporary songs like ABBA’s I have a Dream.

The choir sing at non-commercial gigs around the ACT. In 2013 the choir sang in many events associated with Canberra’s centenary, including giving concerts at the National Arboretum and the High Court.